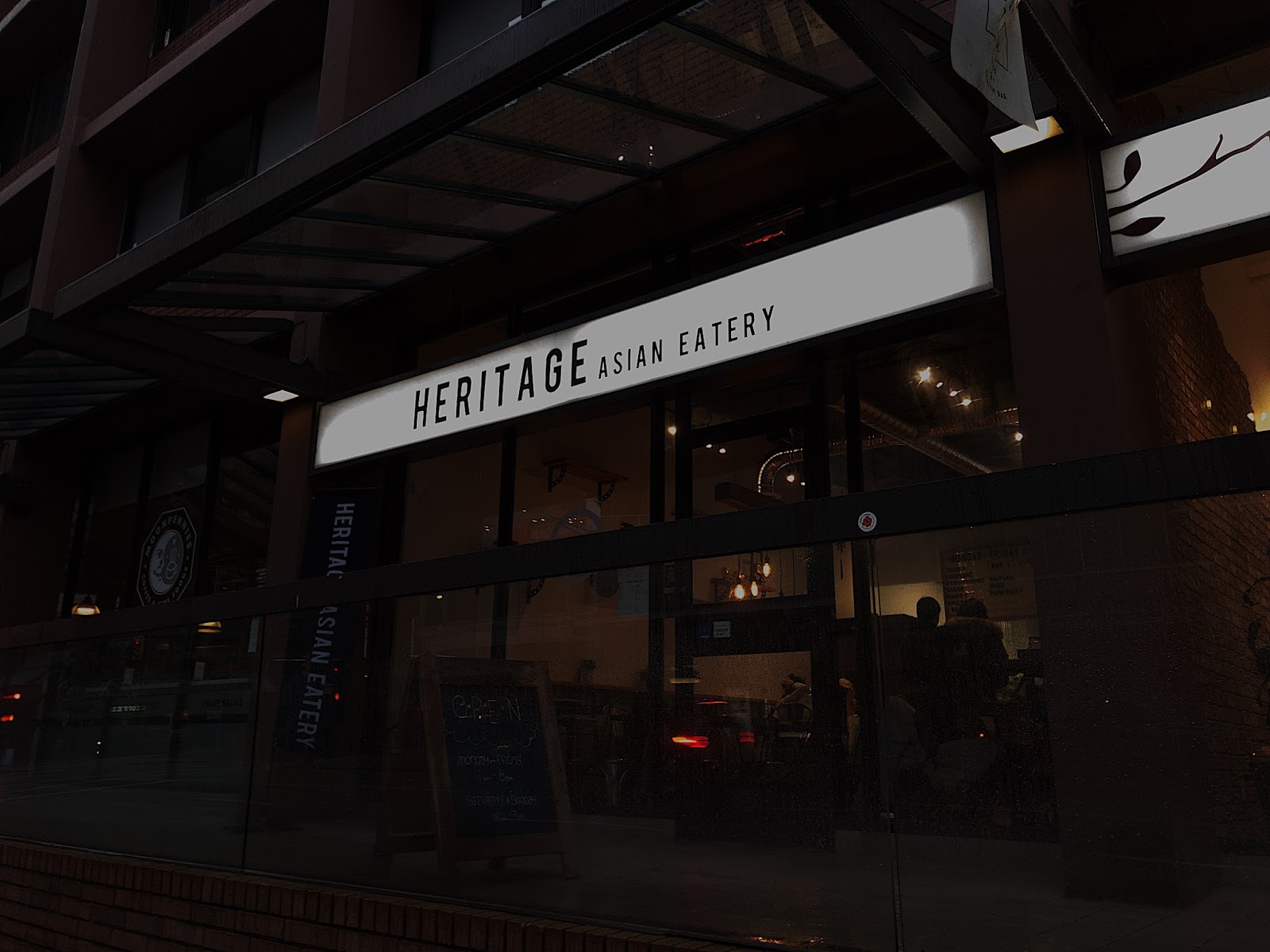 Even though the 2018 Women's March was quite some time ago it took me a while to post this because I wanted to do the topic justice.

I sort of hummed and hawed over what to write...it's a sensitive topic the majority of people wouldn't dare go near (myself included.)

I'm not going to get into the politics of the march nor am I here to spread any feminist/intersectional propaganda (my blog isn't about that.) I'm just here to share my side of the equation...I'm not speaking for anyone, I'm only speaking to the subject at hand vis-á-vis my own experience. Notice the deliberate differentiation between "for" and "to."

I came up with two slogans for the march:

Those were the words inscribed onto our posters that day, which we dutifully paraded around Jack Poole Plaza despite being in bad need of a toilet and the torrential downpour.

We actually missed half of the march because we had to make a pit stop to pee (our biological needs come first y'all)...we lost them after that (how you can lose a crowd of 3000 people is beyond me.)

Here's the lil' blurb I posted to instagram and facebook, along with some photos (if you care to read it:) 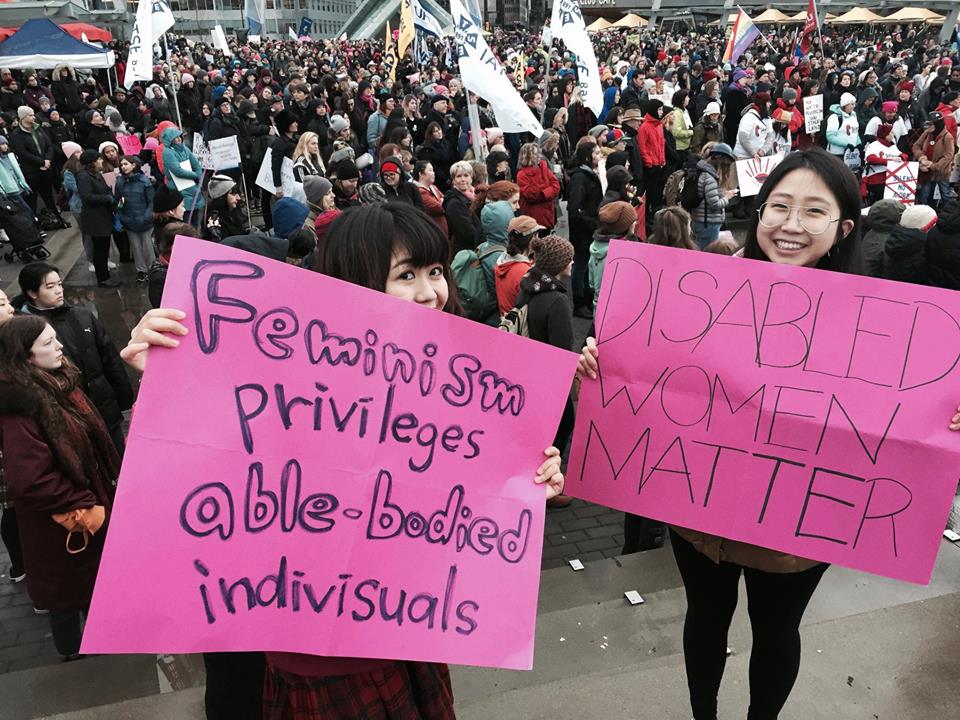 Atsumi & I at the 2018 Women's March that was held downtown at Jack Poole Plaza today! Our posters "Feminism Privileges Able-Bodied Individuals" and "Disabled Women Matter," offers a critique of traditional feminist discourse. We joked that we were "fourth wave," "beyond" third wave feminism.

As much as I loved the presenters, as I was expecting, the disabled community wasn't represented at all...

We did get our picture taken by lots of people and a couple of news outlets though...so hopefully word gets out and us disabled folks are represented next year!

Disability awareness is important, we deserve to be included in LGBTQIA, Indigenous, POC, and feminist circles too!

As the saying goes: "If it isn't intersectional, it isn't feminism."

For that reason, I'll continue fighting for my cause as a Disability Activist! WE WILL BE MARGINALIZED NO LONGER!! 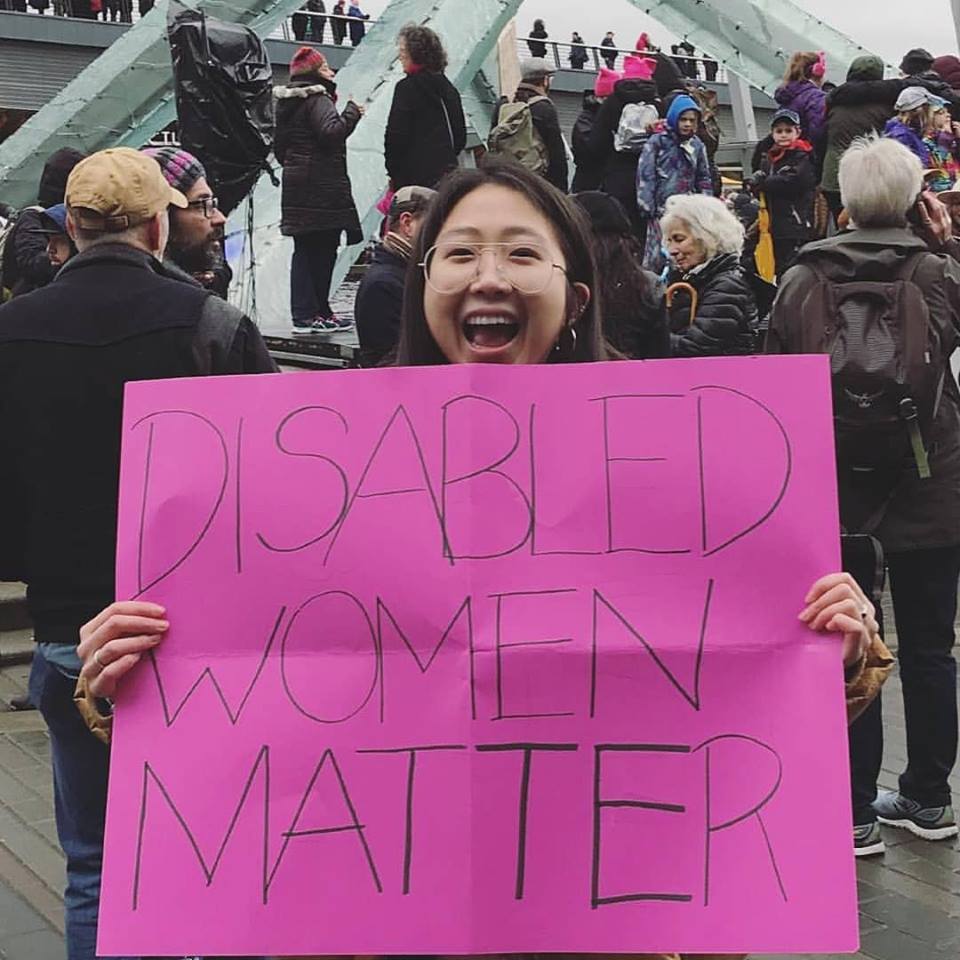 I also posted a similarly themed facebook status that day:

I'm going to the 2018 Women's March today! I made a poster with the slogan: "DISABLED WOMEN MATTER." In the same vein as Black Lives Matter, if you will.

That's not to say we disregard the work/contribution of said individuals, we just need to recognize their privilege. 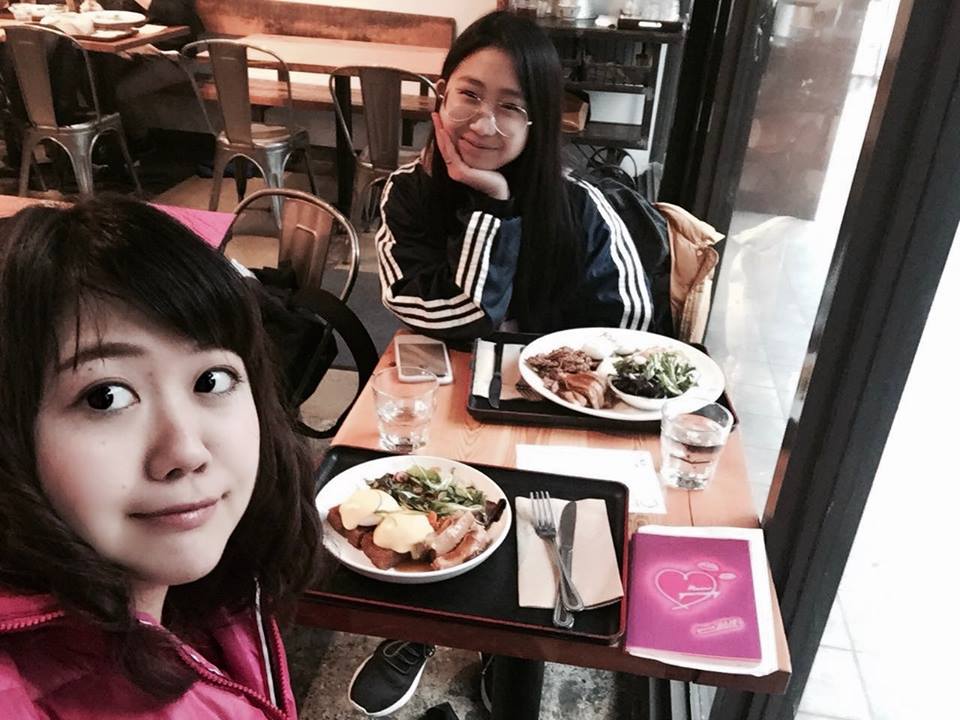 On the subject of controversial topics, Atsumi & I went to Heritage Asian Eatery for a re-feeding post-march (having completely depleted our calorie stores.)

Fusion food has yet to completely win people over. Some people (understandably) see fusion as an insult to said traditional cuisine. I just take it for what it is. I'll eat it, be it a piece of fried chicken sandwiched in a mantou or a chicharron topped pad thai (bad example but you get the point.)  If I like it, I like it! 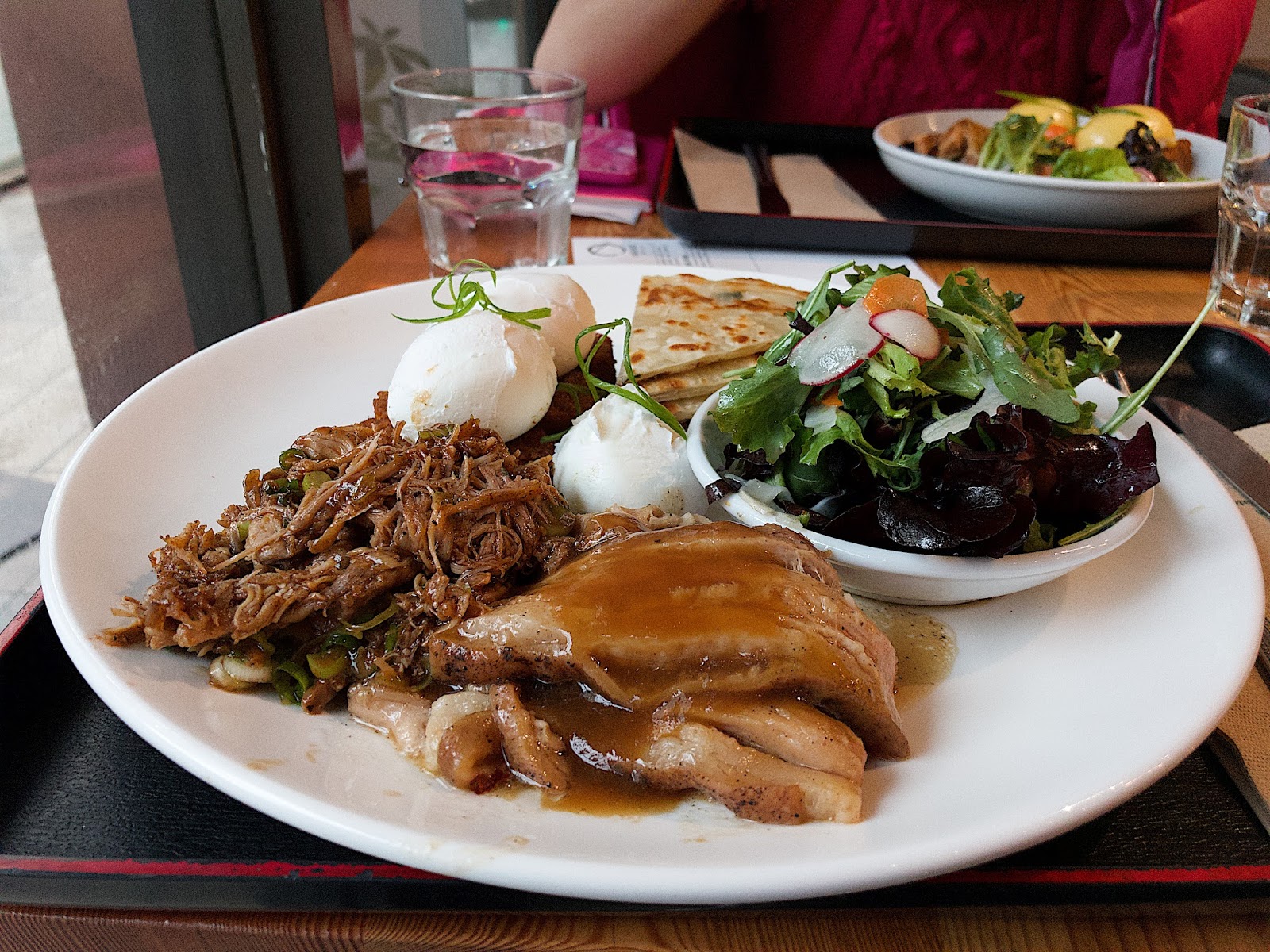 This was a big one alright! So big that I had to include two separate photos to show the dish in its entirety. Here we have their pulled duck leg and local braised pork belly. The pork belly was well-executed, being melt-in-your-mouth tender. The duck leg was similarly delicious and full of flavour, the green onions added a nice punch! 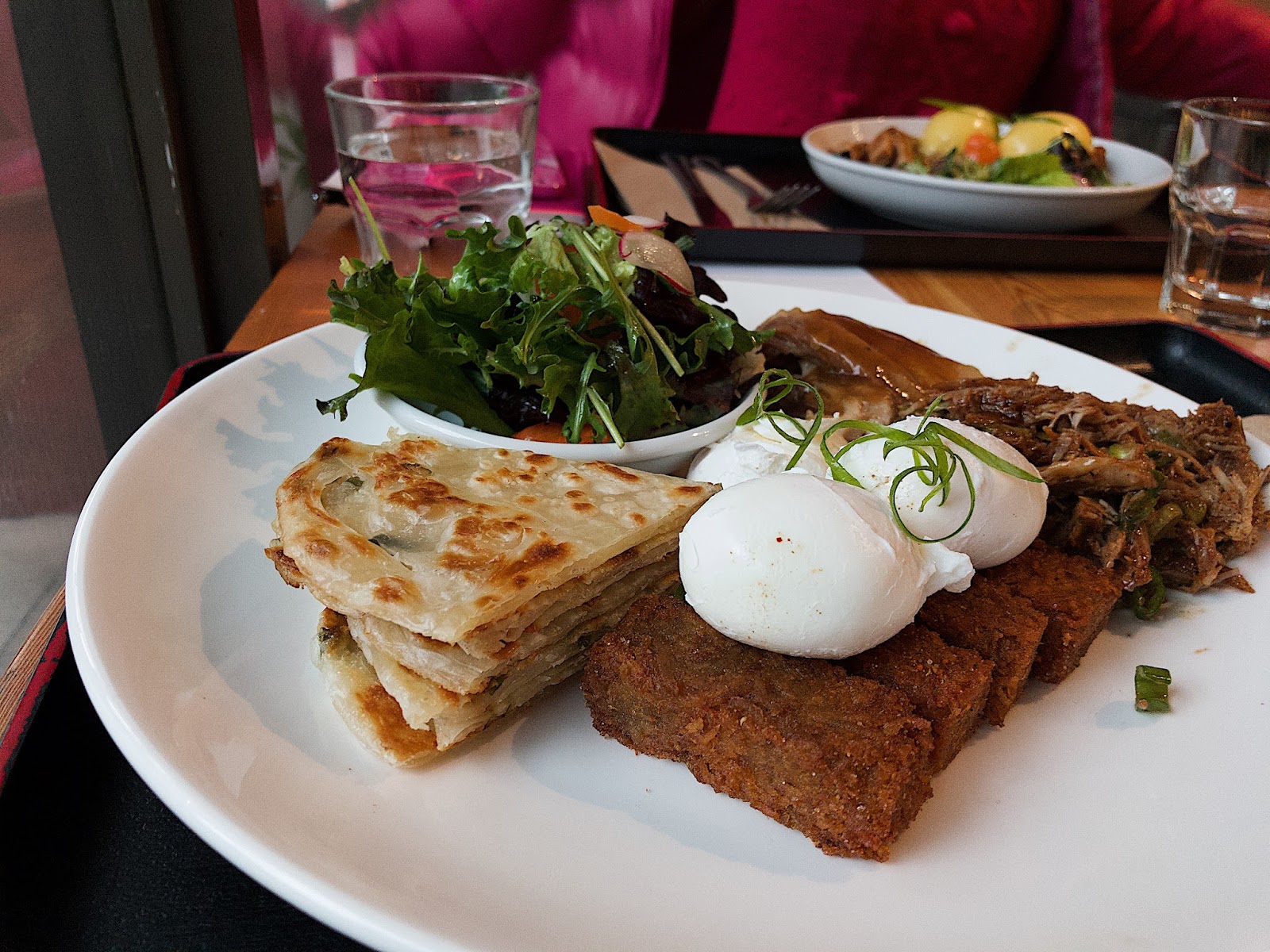 I don't know about you guys, but I eat a whole lot of green onion pancake (I just ate 5 this morning...I have stacks upon stacks of them in my freezer.) I wasn't completely convinced by these. They were a bit too hard/crusty for my liking. The potato rosti was interesting in that it appeared to be deep fried (not pan fried.) 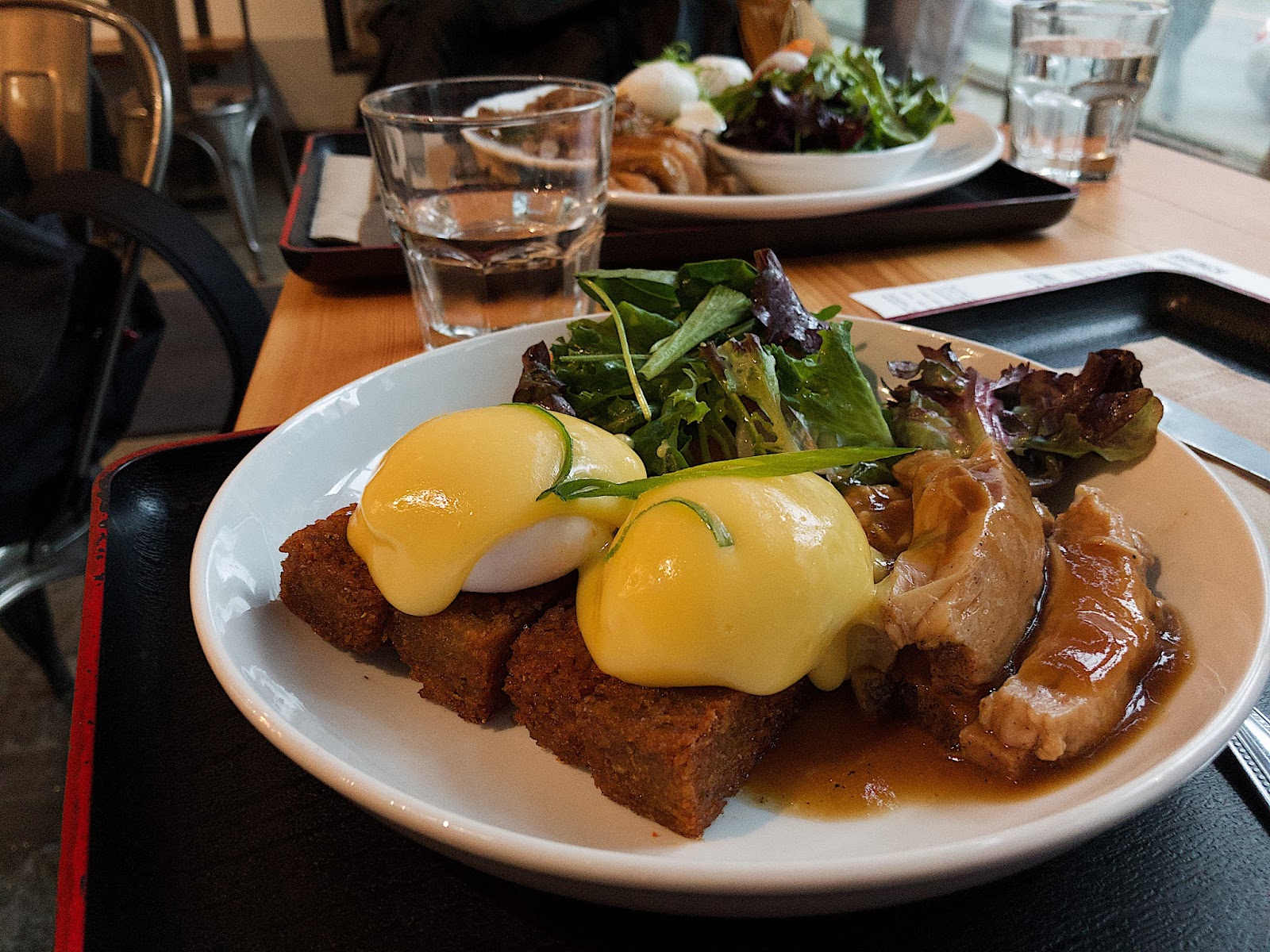 Atsumi ordered the smaller version of my dish (save for the hollandaise on top) and she seemed to enjoy it!