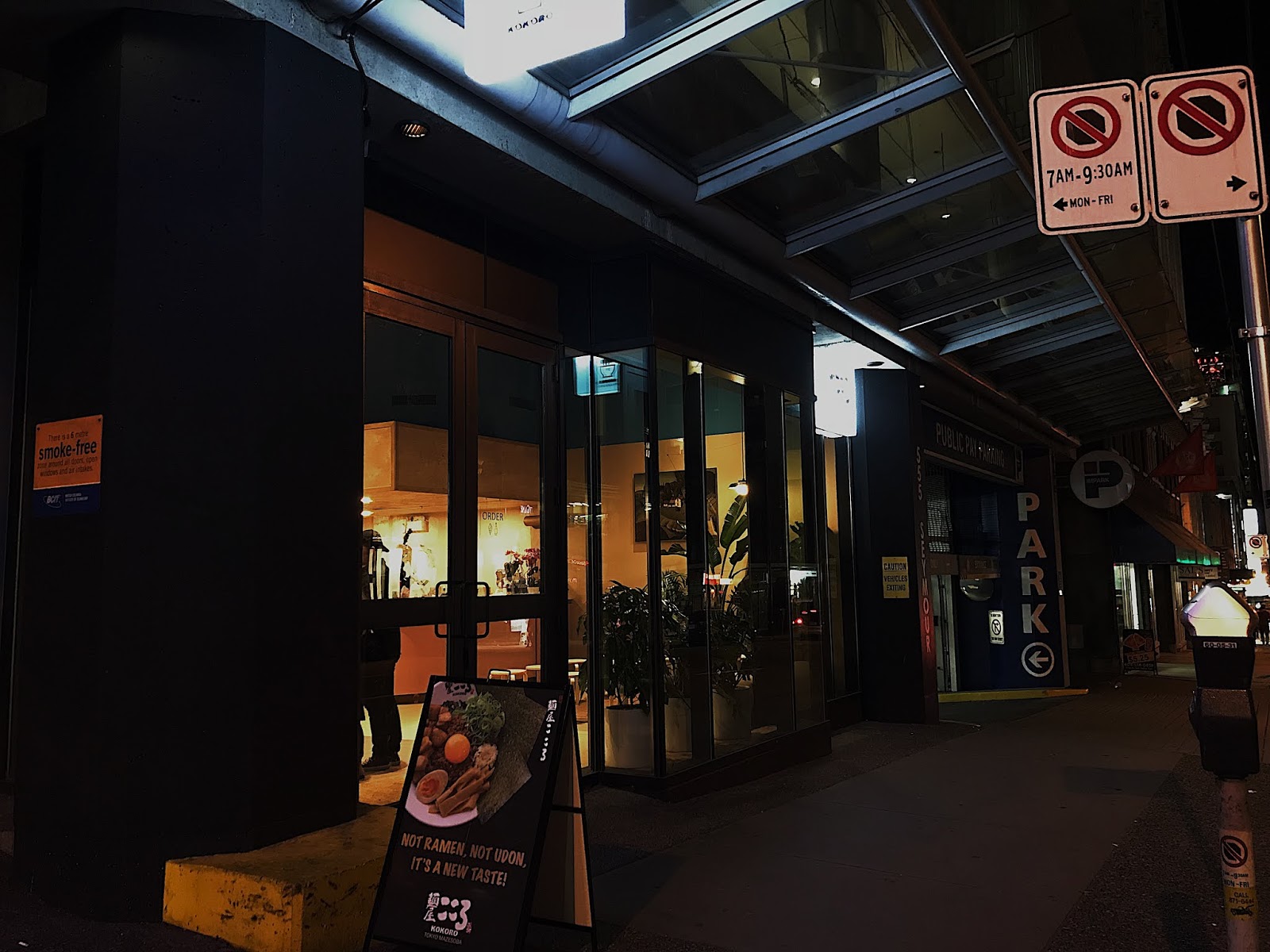 So Jeremy quit his job. All you can drink craft beer aside, hipster startups just aren't for everyone, yenno?

So what I have been up to?

My mom's been gone a whole week now (she went back to Taiwan to see my grandma,) and I'll be the first to admit, I'm struggling a bit. It's hard living in a house by yourself. Sure, my dad comes over periodically but other than that, I'm pretty much on my own.

Sure, having the freedom to do whatever you want is nice but, does it really top a home cooked meal after a long day of sloughing around campus? With her gone, I've already lost 5 pounds (unintentionally.) Weight loss hack: keep your mothers at bay, home cooked meals are dangerous!

Still, I miss the days when I had bottomless plates of lo mai gai and green onion pancakes to gorge on! It's all Hon's takeout and ubereats from here on out...

Anyways...I haven't been this genuinely excited about a restaurant in a longgg time. After 6 years of blogging (has it really been that long?) it really takes something *special* to pip my interest. Kokoro is that special something!

I honestly find it exhausting keeping up with restaurant openings and media releases but Kokoro is definitely one worth covering! To sum it up, here's my yelp review of Kokoro:

The best thing to hit this town since ubereats (you can quote me on that one.)

Who else is tired of the same 'ol, same 'ol bowl of tonkatsu in a thousand different renditions? (Not hating, I love me a bowl of steaming hot tonkatsu!)

Kokoro is the first mazesoba purveyor to hit Vancouver and boy, is it a welcome change! It's good, it's really good. Get their signature mazesoba if it's your first time. The minced fish sauce is ridiculously fragrant...don't get me started on the texture of the noodles!

In the span of 2 weeks, my boyfriend has gone 4 TIMES. If that's not saying something...

So there you have it folks! Now go try out Kokoro for yourselves (I swear I'm not being paid for this.) 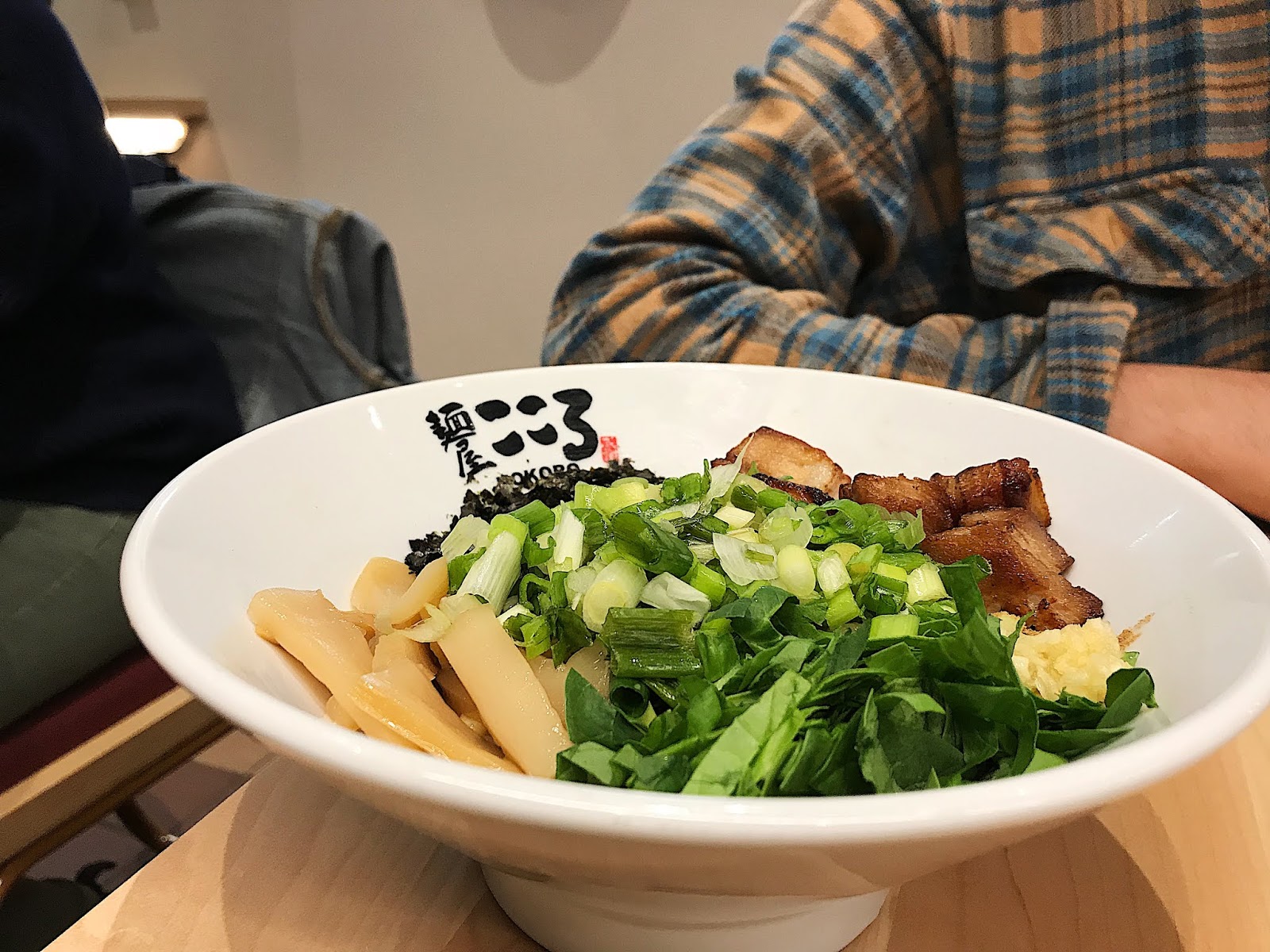 Mazesoba with a distinctly shio element! This is the fish-less version of their bestseller, the Niku Mazesoba, with added shio. It's all down to personal preference really. If you're partial to a shio ramen, you'll definitely like the shio flavoured mazesoba. On to the noodles. The noodles, oh the noodles! What can I say? #noodlegamestrong. Toothsome, al dente, and chewy! 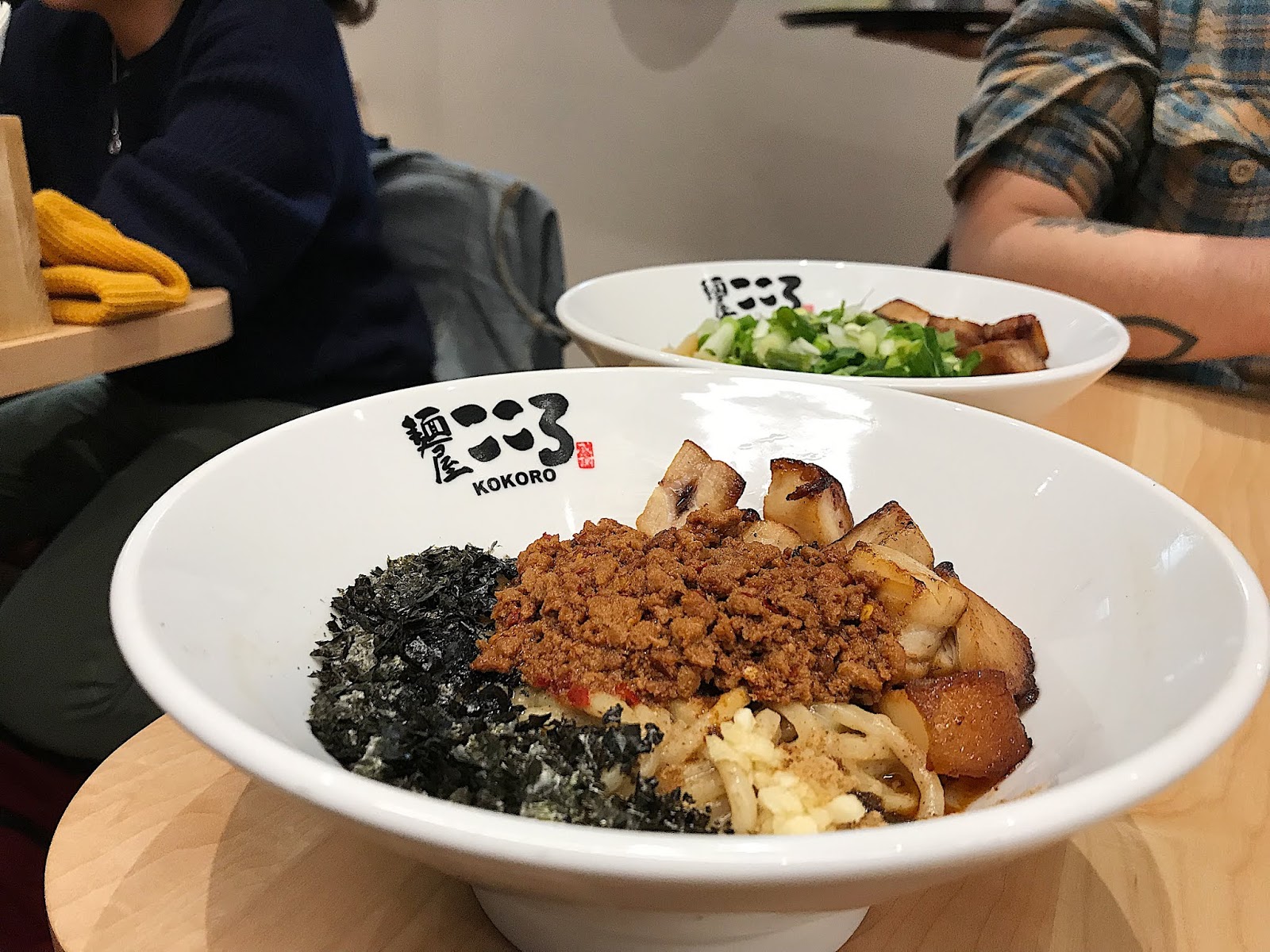 What a welcome change for the palate! Unlike anything I've ever had before (and I'm not just saying that.) Definitely a step (or 2 steps) above their shio mazesoba. The shio mazesoba holds its own...but after comparing the two, I'm partial to the Niku. The fish paste is something else; ridiculously fragrant! Even if you're adverse to fishy tasting things, I don't think the Niku will bother you. It's pleasantly fishy in a non-obtrusive way! 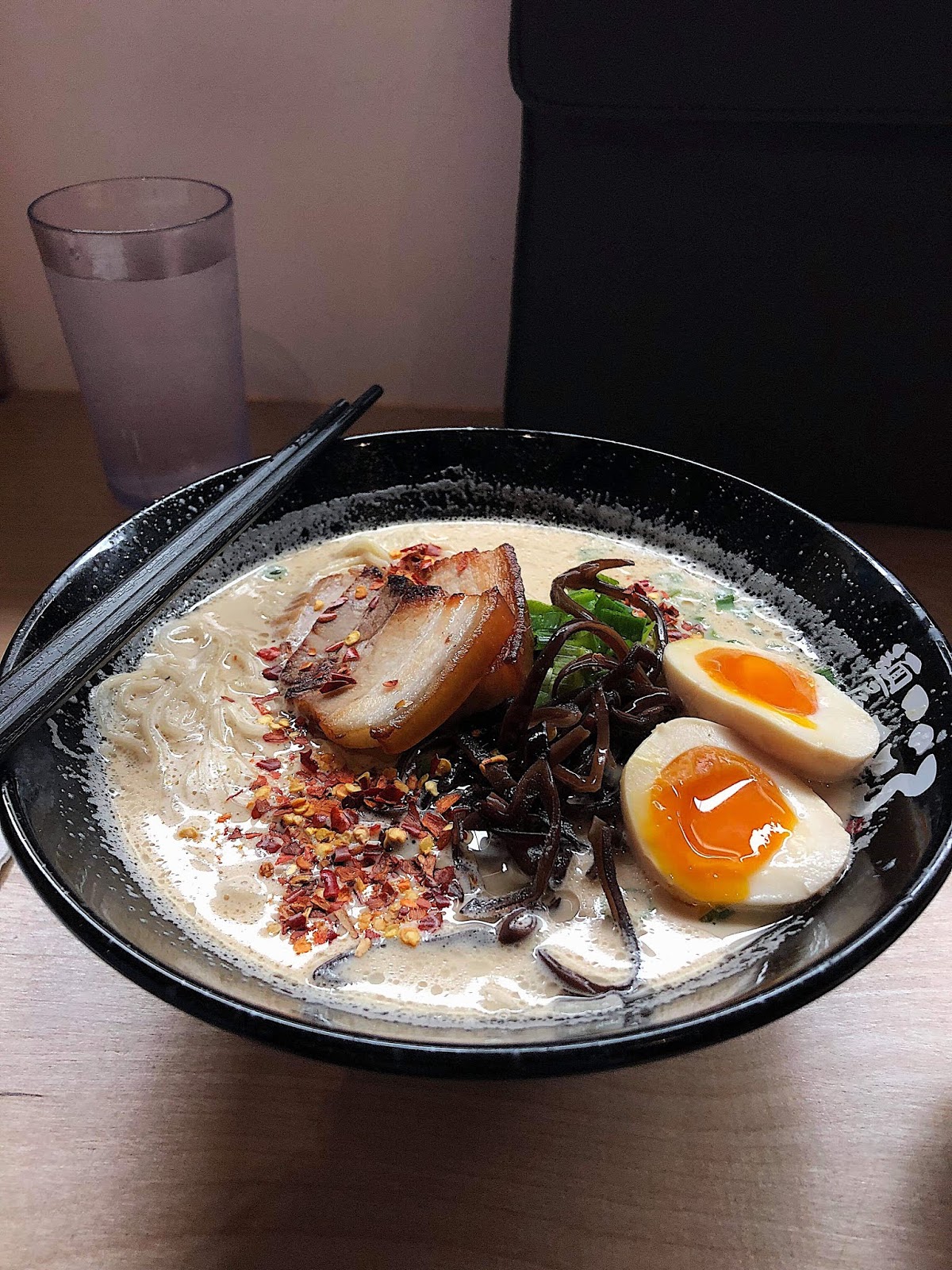 Tonkatsu Ramen (Jeremy had this on a separate occasion.)
3/5 stars

How deceptive this beauty of a bowl was. Just look at that beautiful piece of delicately julienned pork belly! According to Jeremy and the reviews I've read online, their ramen game is a bit weak. Apparently the broth's to blame. 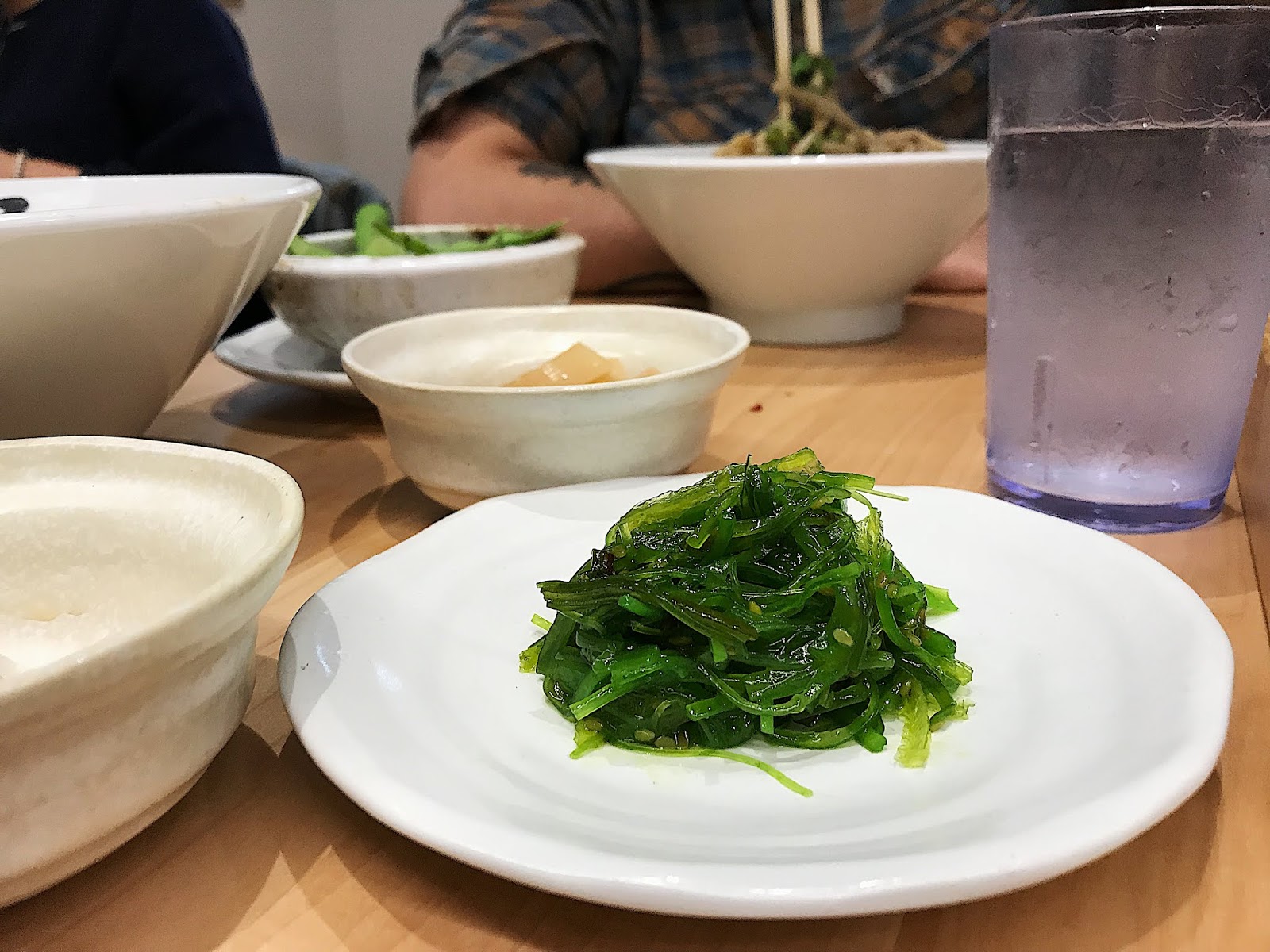 Holy smokes. $3 for such a small portion! Was the all too steep price tag warranted? Yes and no. Was it better than the mountainous bowl of seaweed salad I usually get at Sushi Garden? You bet! Was the one mouthful sized portion enough to satiate my curiosity? Nope. This resulted in me ordering a second mouthful. $6 for two mouthfuls worth of seaweed salad! 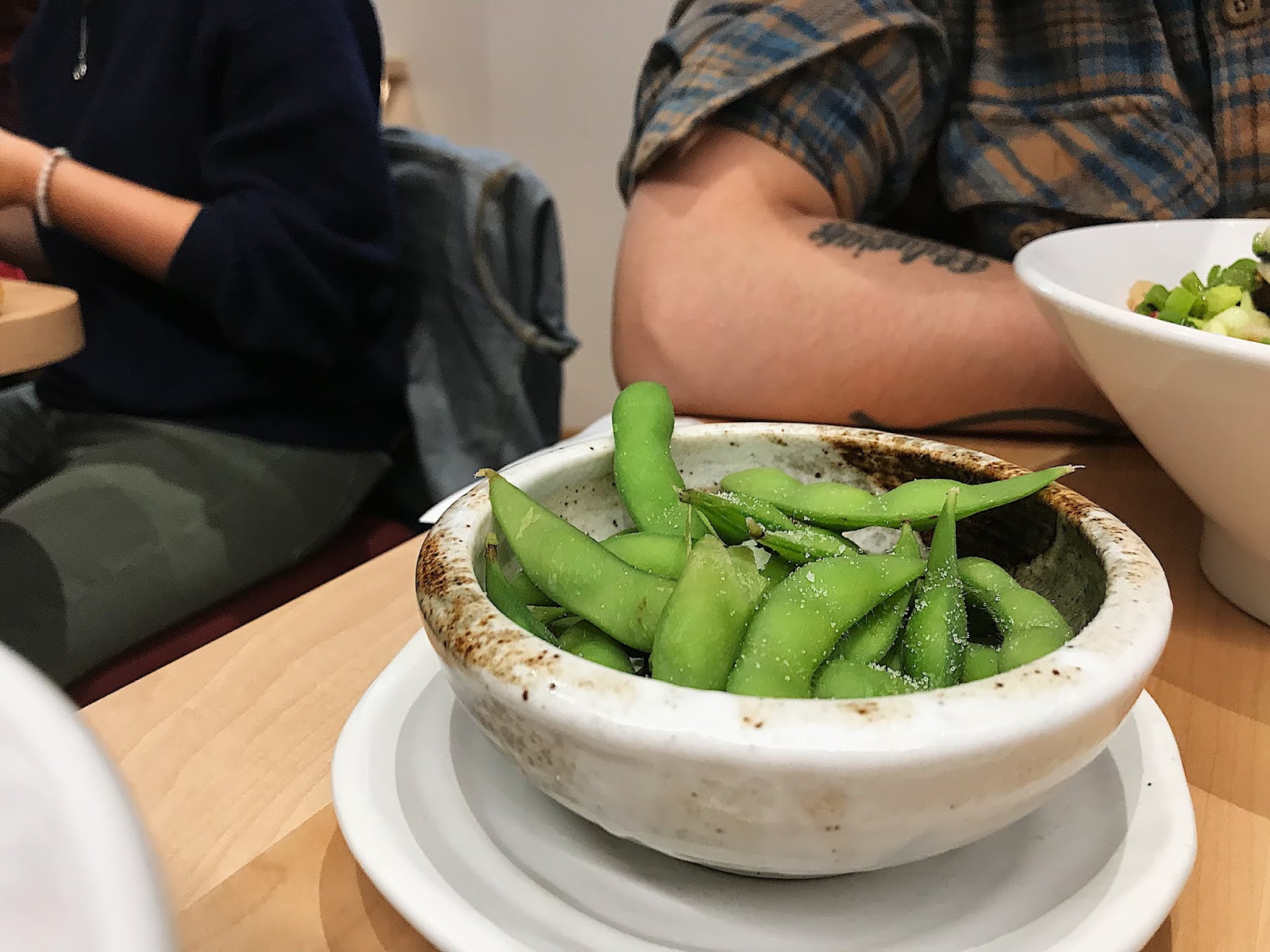 At every Japanese restaurant we go to, Jeremy orders an edamame without fail. Kokoro's was fresh and perfectly steamed! The sea salt was top-notch. No complaints here! 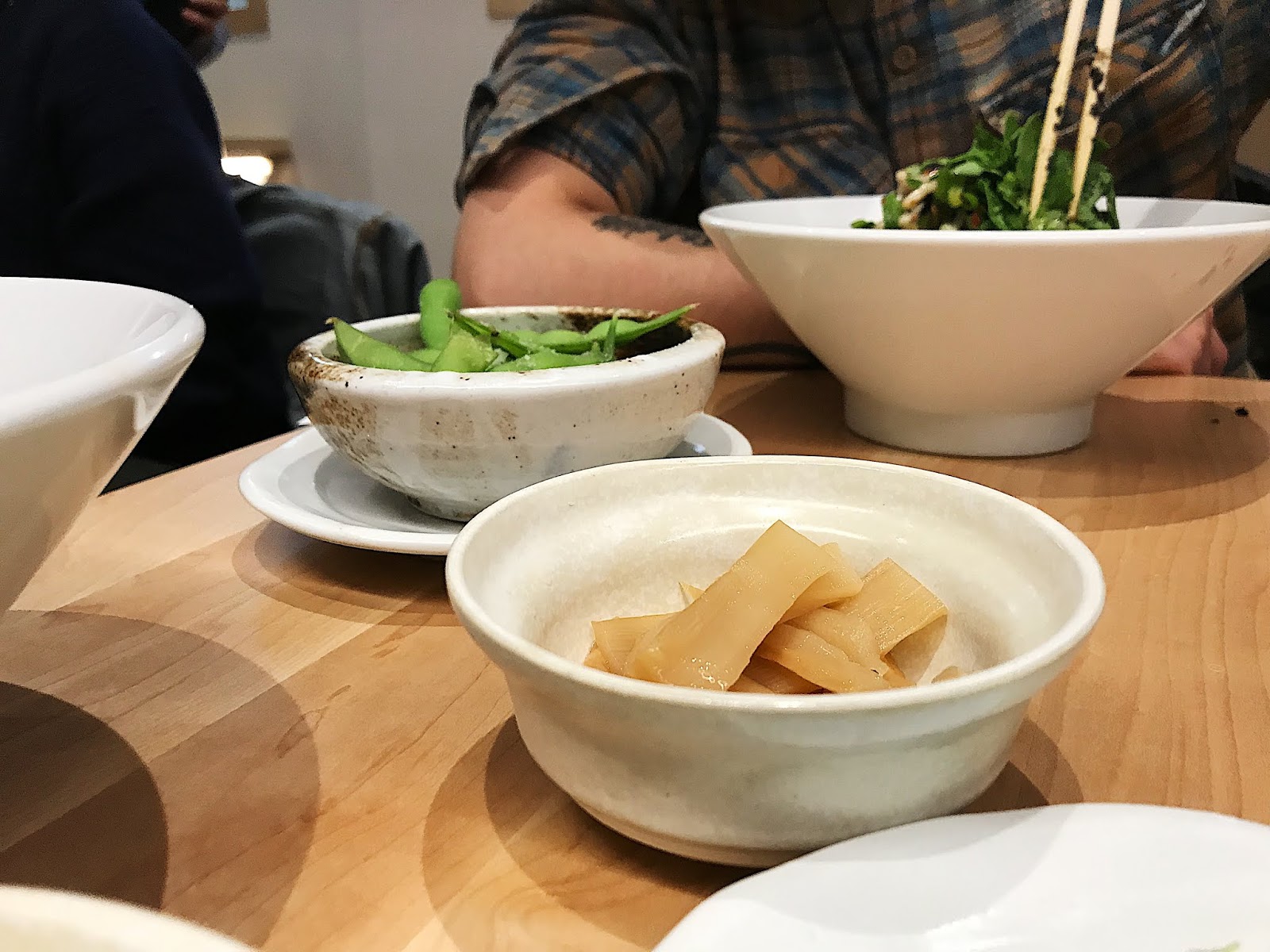 I've never cared much for bamboo shoots, but now I've come to realize their importance in making/breaking a bowl of ramen or mazesoba. Those precious little stalks, when rendered properly, make all the difference. These ones were just okay. The bamboo shots at Ramen Taka (my most recent Ramen-ya visit,) far exceed the ones at Kokoro. 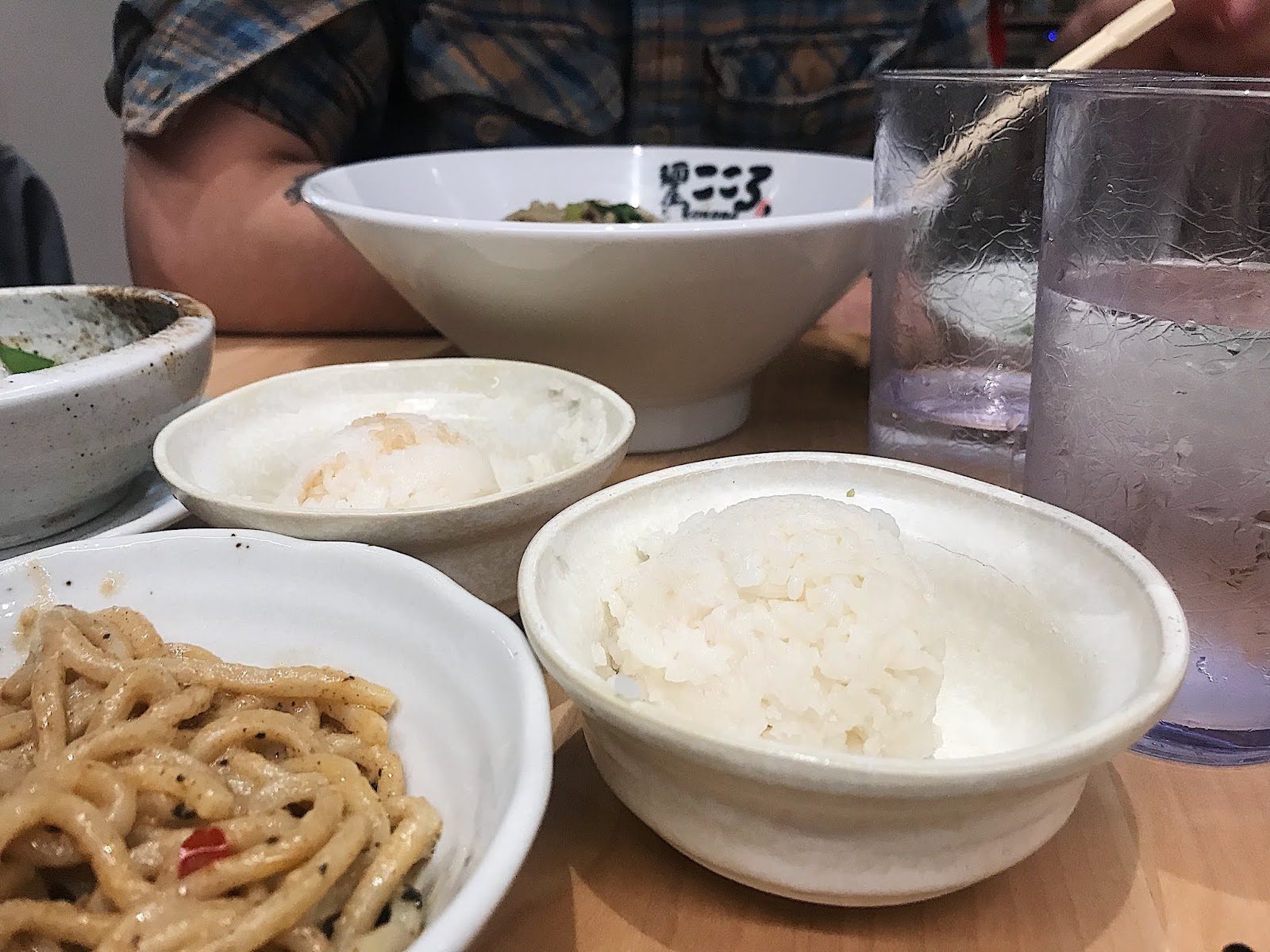 They give you free rice at the end (or in the middle if you ask for it,) to mix in with the remainder of your soup! Really fun and helps fill you up! 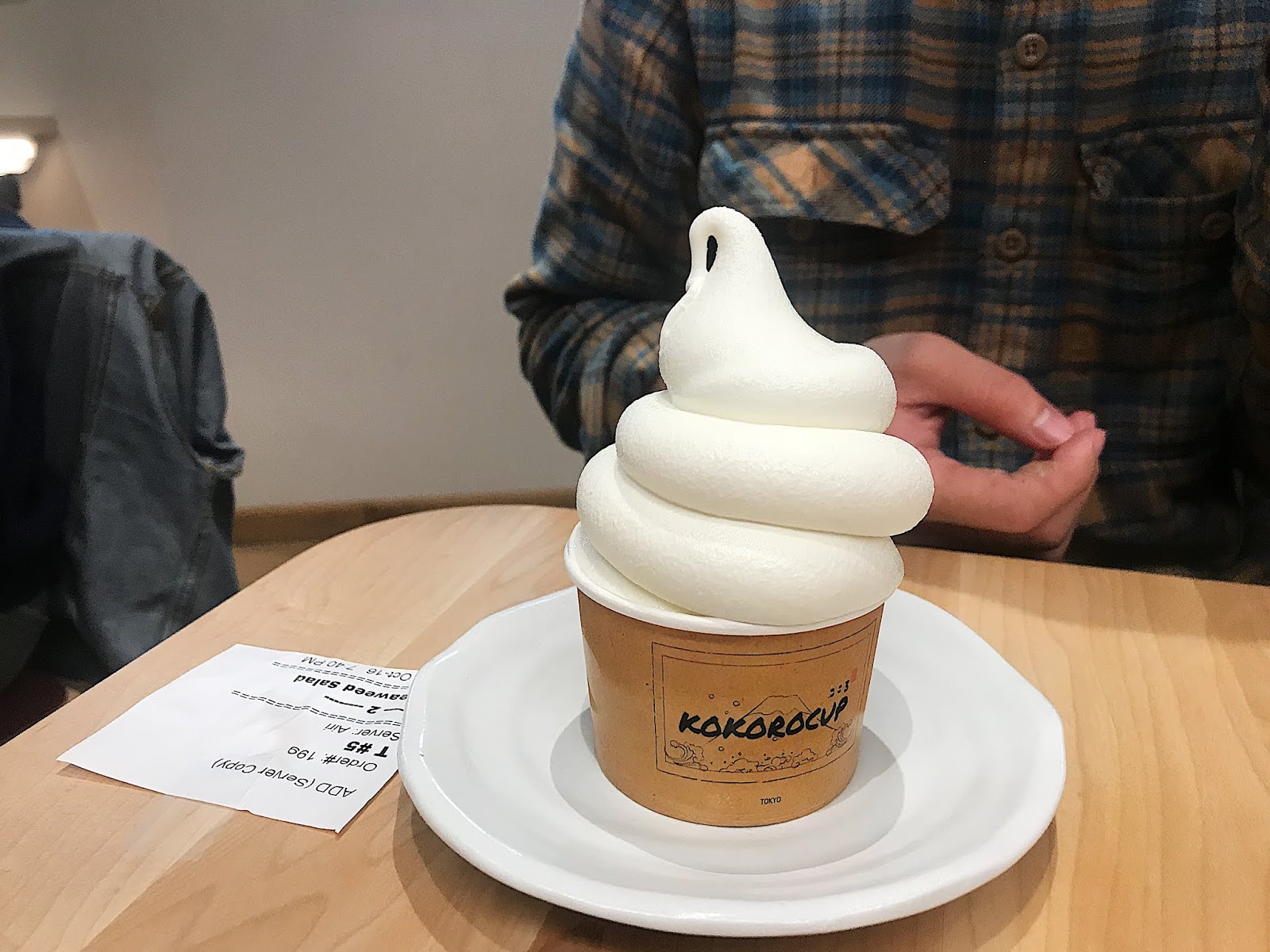 Jeremy has had this exact cup a grand total of 3 times now. I keep bugging him to try the Fuji Cheesecake Cup but apparently he's cheesecake-adverse?! Who the heck is cheesecake-adverse?! Anyways, he likes this enough to have it as a repeat order, so it's winner in my book. The texture is interesting, it's a bit hard when you first dig into it (the spoon they give you is paddle-shaped...so cute!) 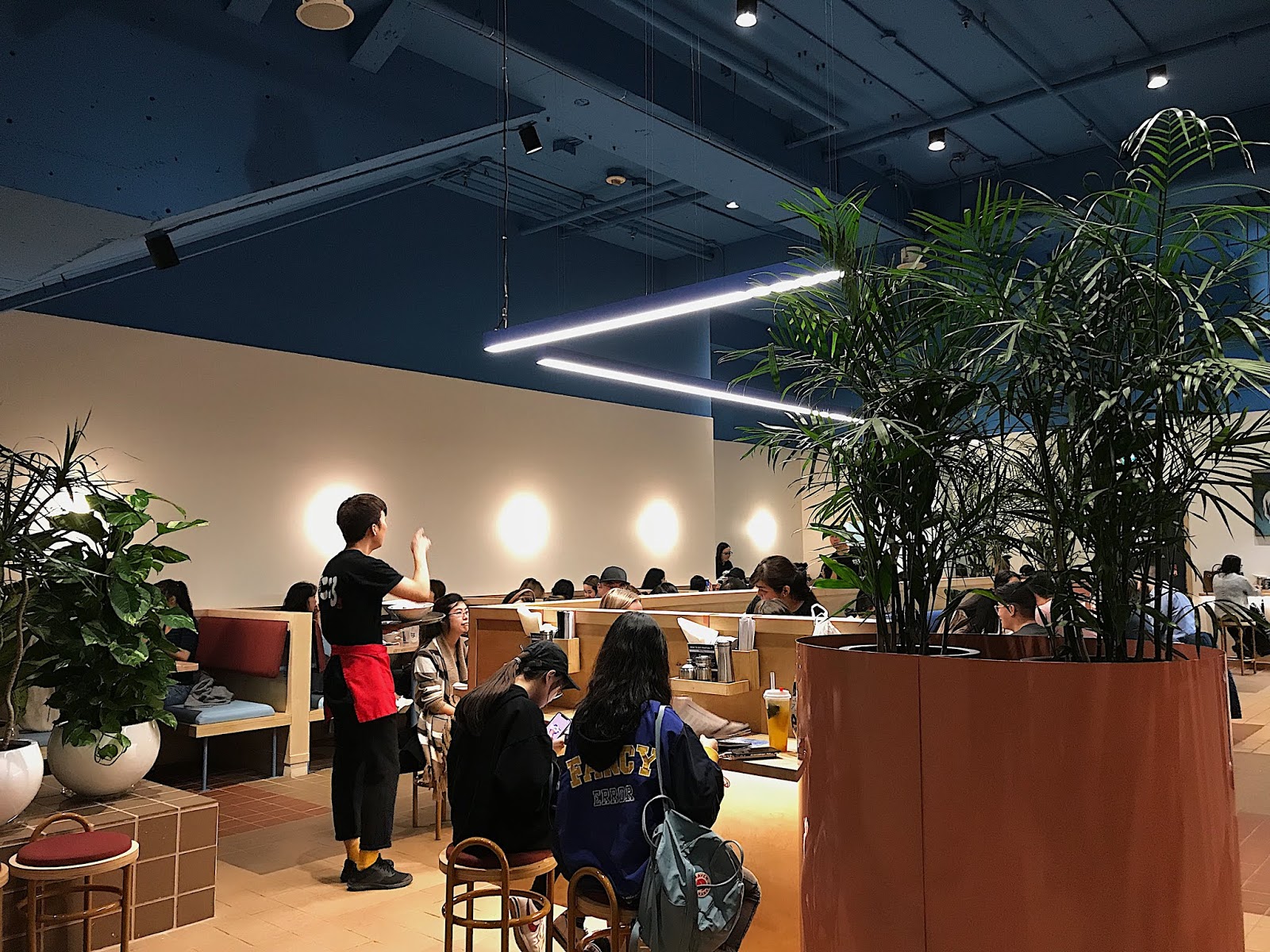 Much aesthetic. Much wow.